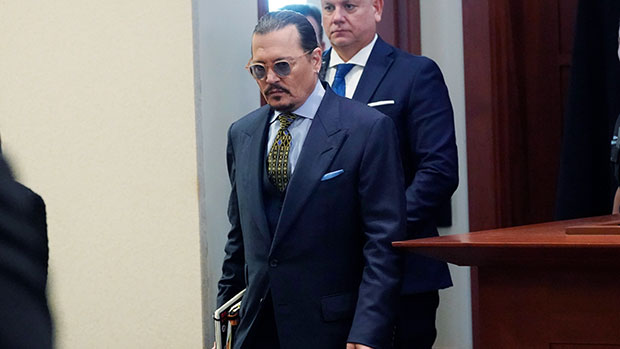 One of Johnny Depp’s supporters got very out of hand during a recess for the defamation trial against his ex-wife Amber Heard on Monday, May 23. Law & Crime network reporter Angenette Levy revealed that a woman called out as the morning recess began, and she claimed that Johnny was the father of her baby, who she was holding in court. “Johnny, I love you. Our souls are connected!” the woman reportedly yelled, and as a deputy approached her, she made the paternity claim: “This baby is yours!”

Angenette said at first Johnny showed that he was happy for the support. “She stands up in the back of the courtroom with her baby and she says, ‘Johnny, I love you. Our souls are connected!’” she explained. “He kind of turned and waved as he does sometimes, and everybody waved.”

Once the woman claimed the Pirates of the Caribbean star was her baby’s dad, things started getting weird. “You saw one of the deputies come toward her, and she held up the baby and said, ‘This baby is yours!’” Angenette continued. “Everybody was like, ‘Uh, whoa, okay.’ The deputy’s like, ‘You’re out of here.’ So the deputy got her out of the courtoom. She was removed. They clipped off her wristband.”

Amber Heard & Johnny Depp: Photos Of The Embattled Exes During Their Bitter Trial & Before Their Divorce

The surprising moment came during the start of the final week of the defamation trial between Johnny and Amber. The Aquaman actress’s lawyers had called Drs. Richard Moore and David Spiegel to give expert testimony on the injuries that Johnny sustained when a piece of his finger was severed and to discuss whether Johnny’s alleged behavior is consistent with someone who has abused drugs and alcohol, respectively.

The defamation trial between the two exes has gone on for weeks. Johnny had sued Amber for $50 million after the actress penned an op-ed for The Washington Post, which he claims has cost him both movie deals and damage to his reputation. Amber has counter-sued the actor for $100 million, also citing defamation.

Camille Vasquez: 5 Things To Know About Johnny Depp’s Lawyer Who He May Be Dating