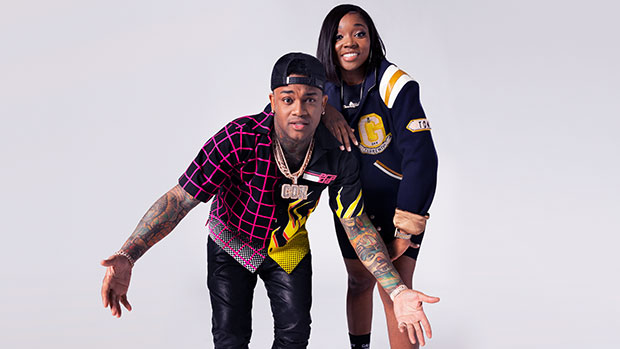 The world has changed since the first iteration of Yo! MTV Raps went off the air in 1995. DJs now no longer pack stacks of wax, opting for a single solid-state hard drive and an iMac. Music videos are streamed on the phones we keep in our pockets. Most notably, hip-hop has gone from the underground to the top of the world. But, while the world has changed, the tenets of hip-hop culture Yo! MTV Raps spotlighted have continued to shine, and that’s why hosts Conceited and DJ Diamond Kuts think the revitalized series, premiering today (May 24) on Paramount+, is still needed.

“I mean, for the simple fact, especially the nostalgic vibe, to bring that traditional hip-hop feel that it was in the beginning,” the battle rapper tells HollywoodLife while he and Diamond Kuts spoke EXCLUSIVELY about the new reboot. “People just go on YouTube, on Instagram, World Star and just see a video. But now, [Yo! MTV Raps] is for the people that really want to get in touch more with the artists, to see an interview, see the up-and-coming rappers — everything. Since the culture now is not so strictly music-based, it’s lifestyle. So you have gossip, you have fashion, you have jewelry. I mean, Yo! MTV Raps put all of that in there but still keeps the music first.”

“I also feel like it kind of saves a lot of people a lot of time of digging and doing a lot of research on who’s high or what’s going on here, what’s going on there,” DJ Diamond Kuts tells HollywoodLife. “You could kind of catch it all in one space. You know what I mean? It’s kind of like a one-stop-shop. Like Conceited said, it’s music, it’s lifestyle, we talk about collectibles, a shot of Hebru Brantley, there are so many things that Yo! MTV Raps is about. And I feel like this is the place you could come get all that you need to get your little hip-hop fix.”

The new series of Yo! MTV Raps promises to give more than a little fix. Kicking off with an episode featuring Freddie Gibbs, the series will spotlight such rising stars and established powerhouses as Saba, Latto, Tee Grizzley, and Trina in the coming weeks. There will be hosted segments like in the past, live performances, features on the latest lifestyle trends, and one segment that Conceited was excited for.

“The cyphers,” he says, “We love because that’s hip-hop in one of its truest forms. You get to see the up-and-comers and these dudes are… they’re great, and they’re buzzing. So you get just a group of them, just all rapping, that was super fire.”

‘This Is Us’ Then & Now: See How Much The Kids Have Grown Up Over 6 Seasons

DJ Diamond Kuts mentioned how their “Back on the Block” segment saw them “go and you check out some iconic hip-hop places.” “We went to these places,” added Conceited, “I mean, not to give you too much, but one of them was where hip-hop started. The building where hip-hop started, where the first hip-hop event went down.”

While this new iteration of Yo! MTV Raps is very respectful to all those who came before, it isn’t a pure nostalgia act. DJ Diamond Kuts and Conceited shared that they were allowed to give their spin on the show to make it vibe with this new generation of hip-hop fans. “But that’s not something you really want to make your own too much,” he adds. “I mean, this is a legendary-”

“–you got to be careful with it,” says Diamond Kuts.

Speaking of the original hosts, is there a chance of André “Doctor Dré” Brown and James “Ed Lover” Roberts appearing in the next season? “We just said that,” said Conceited. “We was just talking about that,” added DJ Diamond Kuts.

If such is the case, will Conceited do the famous Ed Lover Dance? “I can’t dance, so it probably won’t be me,” he says. “I’ll do it,” says DJ Diamond Kuts with a laugh, “We got to do it with him. How about that?” “Y’all got to do that,” said Conceited, conceding the point.

Yo! MTV Raps is now available on Paramount+, with new episodes dropping every Tuesday.